Whether for young families or professionals, the modular design makes CHIKE the perfect choice for a wide range of customers.

The suspended tilting chassis makes CHIKE extremely comfortable, safe and manoeuvrable – a huge advantage, especially in the city. And for relaxed loading and unloading or when your children want to get in, you simply block the tilt mechanism with a switch on the handlebars.

The innovative design makes optimum use of space. With a length of less than 2 metres and a width of 73 centimetres, CHIKE fits on narrow cycle paths and through all standard doorways. And with a maximum gross vehicle weight of 200 kg, it still offers plenty of capacity for everything you want to transport. 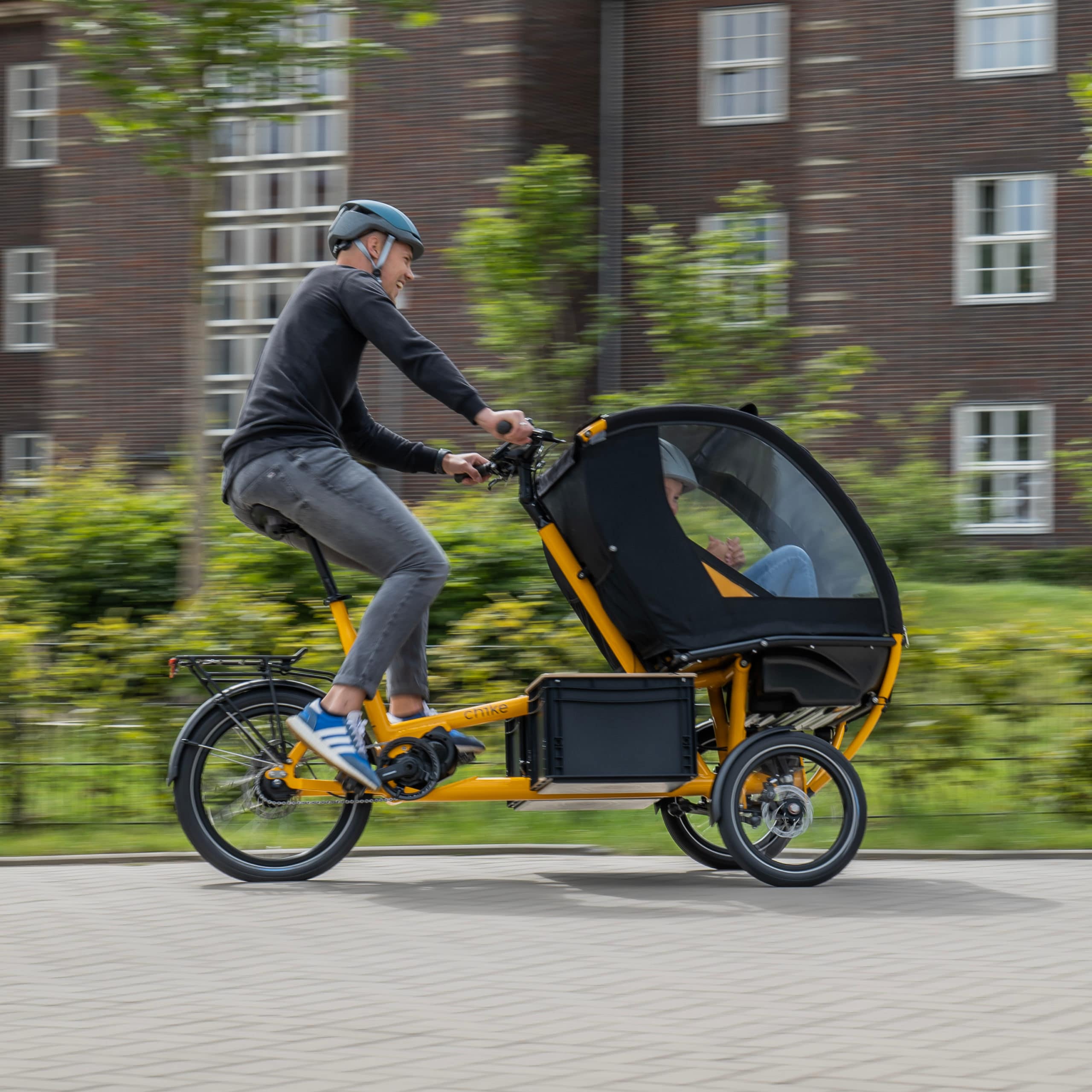 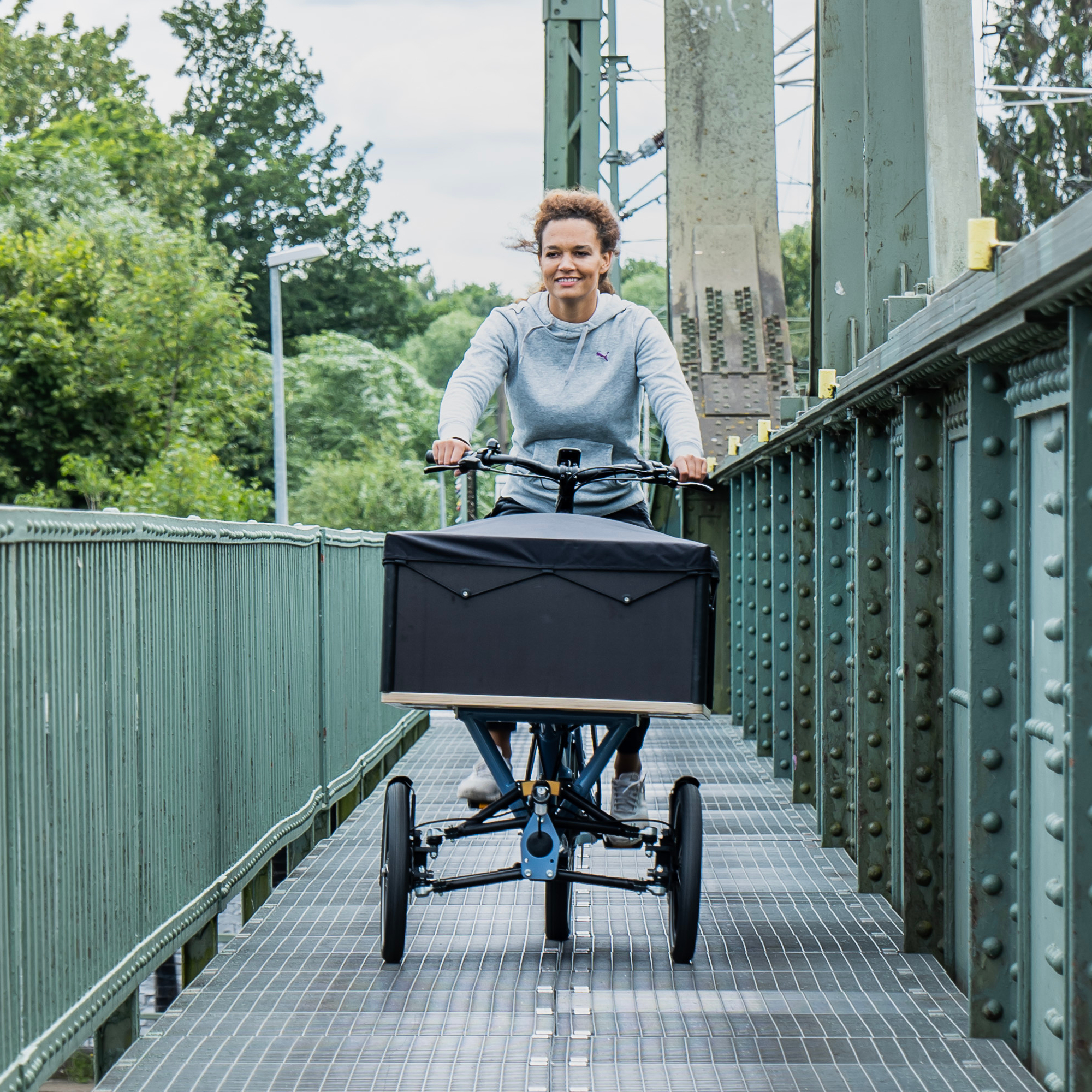 The CHIKE E-Kids and E-Cargo models are now available with a drive upgrade offering increased range with quieter and more efficient riding, whether that’s travelling in the city or on a tour with the family. In addition, we have made improvements to the function and handling of the E-Kids cabin and expanded our range of accessories.

The cargo version of the Shimano Steps E6100 drive now supports pedalling at speeds of up to 25 km/h. The combined muscle and motor powers are transmitted to the Shimano Inter E5 Di2 hub gears by a Gates CDX belt drive. The drive system is powered by the new Shimano Steps 504Wh battery for longer ranges.
Shimano has optimised the E6100 motor in the new CRG version making it ideal for transporting heavy loads. Whilst keeping its proven compact design, the new E6100 CRG motor offers maximum support even at low speeds and with little torque input, which is particularly helpful when starting off with a heavy load. The level of support can be customised via the Shimano E-Tube app.
In combination with the Shimano Nexus Inter E5 Di2 hub gears, there are further advantages including the option of fully automatic shifting or using the start mode, in which the system shifts back to a previously defined gear at a red light, for example. There are also advantages with the belt drive. The high-quality, carbon fibre-reinforced CDX belt from GATES is quiet, does not need to be lubricated and lasts much longer than a chain.

The cabin offers an additional flap at the front of the children’s seat, which prevents small objects from falling out of the leg space without hindering the child’s easy and independent boarding.
We have also improved the roof of the cabin. It is now reinforced with EPP, which prevents water from collecting on the cabin. The roof can be opened at the front so that it is easier to communicate and interact with your children while riding.

For both the E-Kids and the E-Cargo, we offer a CHIKE splash cover. This robust and waterproof canopy for the entire bike can be securely attached to both models.
There are also water-repellent splash guards for the front mudguards of the CHIKE, which are particularly useful when cornering on a rain-soaked road.
Both of these new accessories were designed in partnership with Fahrer Berlin. 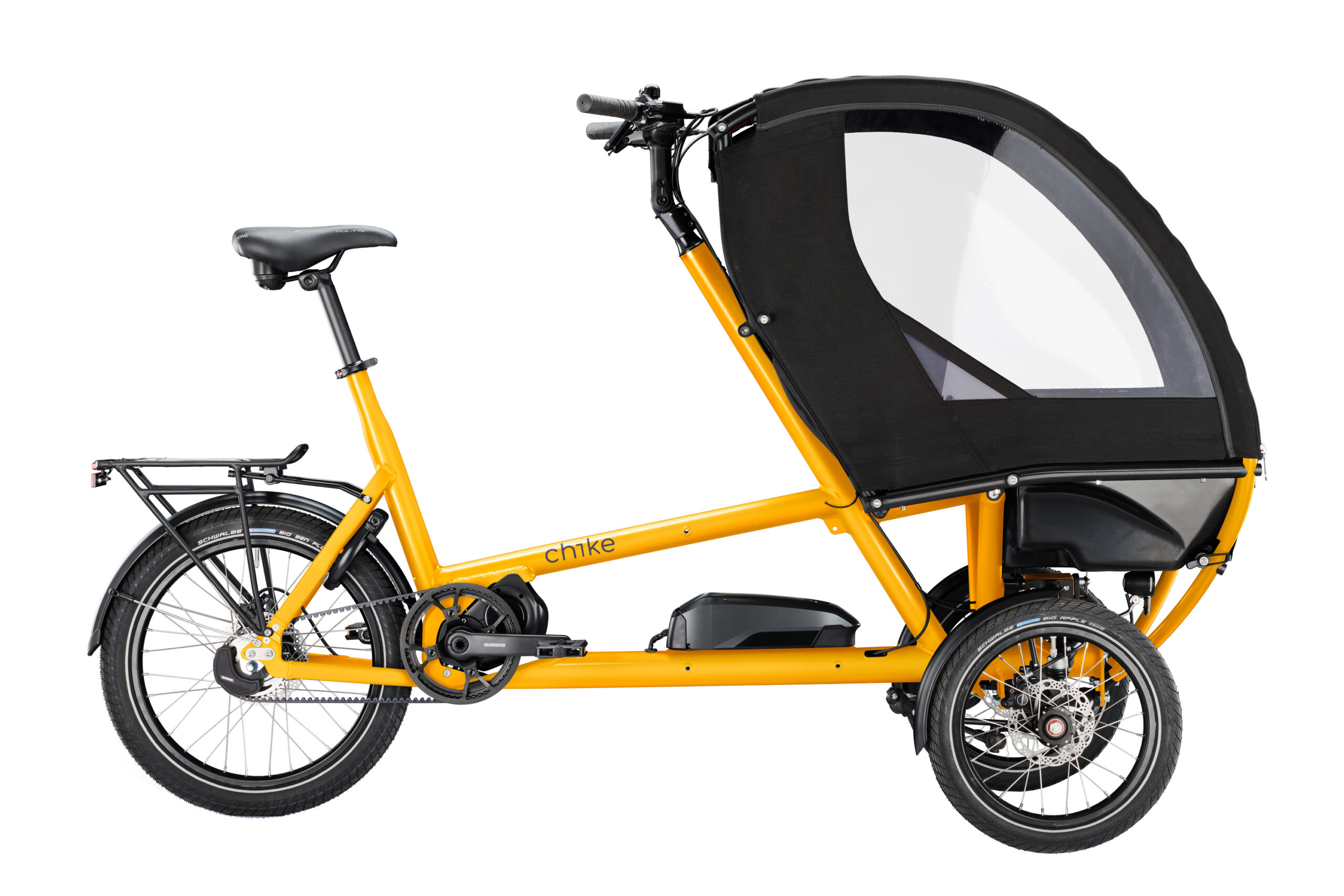 Optimised for the safe transport of your children in the city, but also ideal for larger loads and longer trips in the countryside. 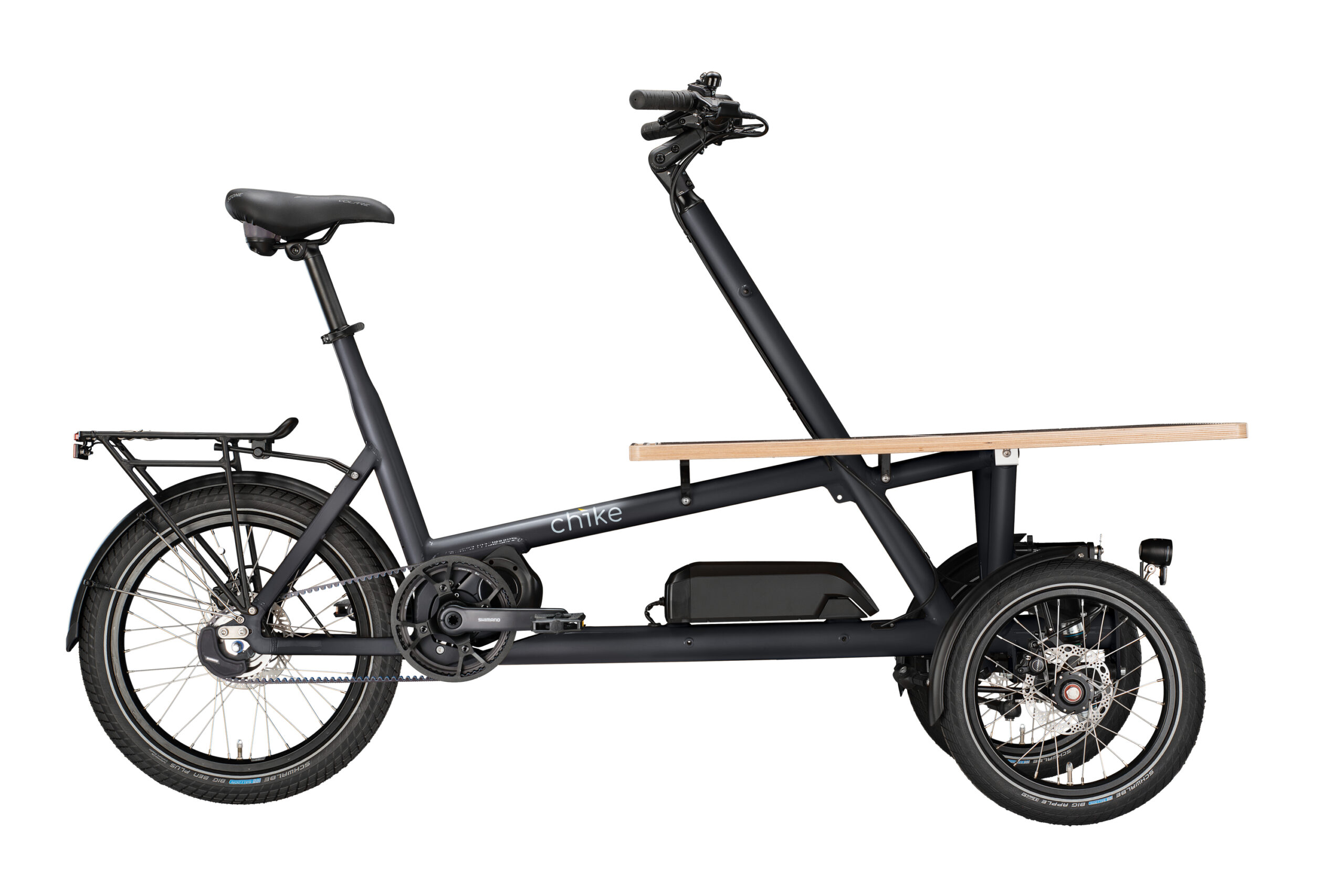 The first choice for professionals, thanks to large cargo capacity and versatility.

Thanks to its modular design, you can easily convert your CHIKE at a later date. Whether from kids to cargo or vice versa, CHIKE adapts to your lifestyle.

we can't change the weather, but we can keep your

The chike team wishes you a Merry Christmas and a

CHIKE is a member of